KMMK:
Monday, March 9, 2021, two citizens named “Rahim Raf’ati”, son of Mohammad and “Rahman Tabesh”, son of Morad, from Shno (Oshnavieh), went to the prison of the Iranian government in “Naghadeh” to serve their sentences.
It is worth mentioning that Rahim Rafati and Rahman Tabesh were sentenced separately to 3 years and 7 months in prison by the Revolutionary Court in mid-November of this year on charges of collaborating with a Kurdish party opposed to the Iranian government, and the verdicts in the appellate court were upheld.
Rahim Raf’ati and Rahman Tabesh were arrested by the security forces of the I.R.Iran in Shno on 15 june and transferred to one of the government security detention centers in Urmia for interrogation. they were finally released on bail in october after completing their interrogation.

It should be noted that, these two citizens were deprived of contact with their families and the right of access to a lawyer during their detention. 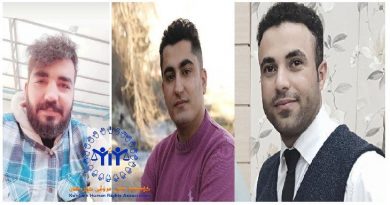