The Iranian Military offence s in the Kurdish regions resulted in death of a Kurdish self-employed man.

On 23rd of May as a result of the Iranian Military offences a self-employed Kurdish man known as Soleyman Afridon from the Kawlan village in the city of Mehabad has died and two others were seriously injured. The military offences resulted in the damage of the private properties owned by the local traders. Islamic security forces use “countering illegal import commodities” as an excuse to breach the privacy of the local Kurdish residents and seize local traders commodities .

Another Kurdish tradesman was killed by the Iranian Security force.

According to the news sources, on Wednesday 26 th of May 2013 a Kurdish self-employed named Mohammed Adhami 19-year-old became a target of the Iranian security forces bullets in border line (Qele Resh) in the city of Serdesht. According to the reports, the victim started doing that job only to provide the livelihood after two months of his marriage. Also it is fundamental to mention that his nephew named Khizir Adhami was killed by the same troops and in the same area.

Another Kurdish trader was shot died by the security forces.

The killing of Kurdish Kolbar and tradesmen on the border with South Kurdistan is still continued. On 13th of May 2013 in the city of Piranshahr, a Kurdish Kolbar named Sahid Chiya Parhizkar was shot died by the Iranian Security Forces. This Kurdish man had a wife and a child. He provided the livelihood through this job. The massacre of Kolbars and seizing their goods are the hostile actions of the Iranian regime against the Kurdish Kolbars.

Two men were executed in the Evin prison on the charges of enmity against God.

Two prisoners named Mohammad Heydari and Korosh Ahmadi were hanged in the Evin prison, on the charges of enmity against God. The Fars News Agency announced the news and claimed that the hanged men had a connection with warring states and they were spying on the Islamic republic of Iran.

According to the Campaign of Defend political and civilian prisoners, four labour activists named Aram Zandi, Fardin Qadiri, Shahpur Hosseini, Jalil Mohammad were arrested. Three of the labour activists (Aram, Fardin , Shahpur) were stopped by the Security forces in Baharan road and after being subject to the disrespect in public the security forces have arrested them and the fourth labour activists was arrested on the same date 19th of May 2013.

Kurdish citizens were assassinated by the Iranian military forces.

Arresting, torturing and disrespecting Kurdish civilians in eastern Kurdistan on various excuses are continuing. Two men known as Mr Habibollah Mohammadi and Behruz Ahmadi, while they were driving back to the city of Meriwan on 15th of May, at a checkpoint before cities entrance, the two men were shot by the Iranian Security forces. Consequently, both of them were seriously injured. Also on 14th of May Nabi Abdullahi and Mahdi Abdullahi from Banhor village and Saleh Salehi from Sarkaran village near Pawa city, on their way to Tehran under pretext of carrying drugs, they were shot by the Iranian Security forces. As a result of that, Nabi Abdullahi immediately was announced died and his friends was severely wounded. Even though the two men were shot by the security forces on the grounds of carrying illegal substances and drugs, the Security forces did not find drugs inside the car.

The young Kurdish man was arrested in Rewanser city by Iranian military forces.

As a part of regime’s discriminatory policies toward the Kurdish population in Eastern Kurdistan, Islamic regime of Iran constantly and on the various grounds arbitrarily arrests and detains Kurdish civilians. On the 16th of May a Kurdish young man known as Milad Moradi was arrested by the Security forces of the Islamic regime at his home. It was claimed that the reasons behind his arrest are still unclear and the security forces failed to provide any reasons. However, it could be said that Mr Moradi’s arrest is part of the regime’s discriminatory policies toward the Kurds in Eastern Kurdistan.

On 19th of May 2013, two civilian activists named Jahanbakhsh Soltanzade and Behnam Bagheri were arrested by the Iranian security forces in the city of Mako. MrJahanbakhsh Soltanzadeh was a Law student at Payam Noor University in Mako. He was arrested at his home and all his personal belongings were taken such as a computer, books and his manuscripts (hand writing), and Mr Behnam Bagheri was arrested on his way to work.

The defence lawyer of Habibollah Golpari Pour, the Kurdish political prisoner was arrested in Urmiye.

According to the published reports, Masod Shamsnejad the defence lawyer of Golparipour was arrested few days after Golpari Pour was relocated from Urmiye prison to Semnan prison. It needs to be mentioned that, Habibolah Golpari Pour was arrested in 2007 in Mehabad city. He was charged for his alleged affiliation with Free Life Party of Kurdistan (PJAK) and as a result he was sentenced to death by the Islamic Revolutionary Court. There is the possibility that Mr Golpari Pour may be executed at any time.

Two of Four convicted brothers were notified of their execution time.

According to the Campaign for the Defence of Political Prisoners, two of four brothers whom have been convicted to death by the Islamic regime of Iran, have been informed by the prison officials that they will be executed soon after the Presidential election. Two of the brothers, Mr Ali and Habib Afshari were sentenced on to death on the grounds of enmity against God and other two Jafar and Wali Afshari have been sentenced to 5 year imprisonment.

A former political prisoner was re-arrested. 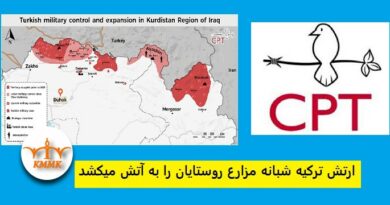