According to reports of Kurdistan Human Rights Association , the number of 17 prisoners Sunni Orumieh prison who want to separate their prison ward and transferred to the sunni special section of the prison, went on a general strike.

The report goes on ineffectiveness in recent days, following the wishes and demands of the prisoners, the prison authorities had attempted to strike. In this regard, officers of the prison, those responsible for provoking the other prisoners and encouraging them to do the strike, the beaten and the relation of these prisoners with members of their families apart and even performing medical procedures for people who had been beaten, been prevented.

It is noteworthy that on Wednesday last week a group of 17 persons from prisoners accused of security, political and religious in section 3 and 4 of this prison were divided, after determining their charges and transferred them to section 12 of the prison’s special there are prisoners of conscience, were to strike.

The names of three of the five people who were beaten by prison officials, as follow:

Ibrahim Gholami, Yousef Qasempour and Abdullah Jam from Mahabad, Abdolkhaleq Mohammadzadeh from Mahabad and Mansour Choupani  from Bokan was going to the (system) are transferred, were transferred to an unknown location.

Given that he already have heart problems and the actual surgery was only his desire to see a doctor outside the prison for treatment of the opposition, and while prison officials to do so asked him bribes were . 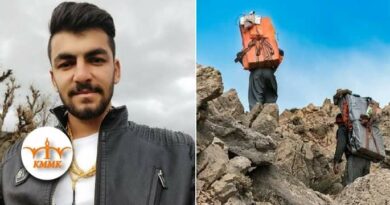