KMMK:
On Wednesday, May 26, 2021, A kolbar with the identity of “Ghobad Rahmani”, 28 years old Died in the border heights of “Tange-Hamam” place in Sarpol Zahab due to direct fire from the forces of Islamic Republic of Iran.
According to reports received by the KMMK, the Iran’s border regiment opened fire on a group of kolbars and businessmen at the Tange-Hammam crossing, As a result of this shooting, the mentioned kolbar lost his life.

Killing of kolbars is an objective example of a crime against humanity that the Islamic Republic of Iran repeatedly commits.
P.S: Kolbar (Kurdish: کۆڵبەر‎) is a worker who is employed to carry goods on his/her back across the borders. Most Kolbars live in eastern Kurdistan and they come from the poorest regions in the area. Kolbars are mostly considered illegal and have no insurance, retirement plans and unions. 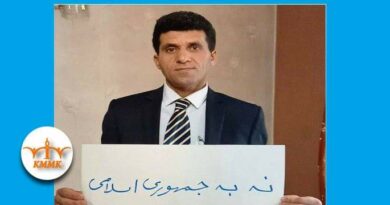