The Kurdistan Human Rights Association quotes Pzhar Abdanan, a part of the Ilam in eastern Kurdistan , It is argued that the current statistics showing the highest number of unmarried girls is 38.8% in the top of the country’s provinces and this also adds to the critical situation of the people of Ilam province.

Of course, marriage alone can not be a criterion for the health of women in society because it may be that some girls who are not willing to marry but this factor combined with the highest unemployment rate and the highest rate of suicide in Ilam indicate the bad economic conditions of the people of Ilam province and, as a result, deterioration of the situation The physical and mental health of the people. In this regard, the high unemployment rate among women should be highlighted in the light of the existing system that encourages and encourages women to stay at home, the lack of marriage of girls, coupled with the high unemployment of women, to worry about how to manage the economy and spend the lives of girls failure to marry girls, coupled with the high unemployment of women, leads to worries about how to manage the economy and to live a girl’s life, and if they do not have a source of income, it reduces life expectancy and depression.

What can be seen in domestic statistics is the record of growing unemployment, neurological discomfort, divorce, suicide, and on a larger scale the daily explosion of mines and the resulting casualties as well as environmental problems, including the presence of large spills, deliberate environmental fires The forests in the province of Ilam are affiliated with the Islamic Republic of Iran, which have all come to terms with each other and make life bitter for the citizens from Ilam.

It should be noted that the Islamic Republic of Iran, instead of solving the problems and social damage inflicted, is constantly seeking to suppress and affiliate Kurd citizens in eastern Kurdistan and Ilam, and in this regard threatened and sometimes gave privileges to some citizens. And eliminate their human dignity, which, in the same vein and based on local resources, has led the intelligence forces of several teachers and taxi drivers to Ilam and forced them to depend on (espionage) and do other things Human and immoral. 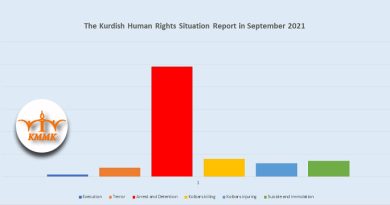